Citibank is the consumer division of the financial multinational Citigroup. Citibank was founded in 1812 and provides banking and financial solutions worldwide.

Recyclever produce a range of Reverse Vending Machines that accept and compact a range of single use plastics and metal containers. The machines aim to incentivise recycling, in return the machine rewards the individual depositing with a reward based on what they have recycled, this reward can be provided in the form of a voucher, opportunity to donate the reward to a charity or via a mobile phone app. The machine also provides the ability to have eye catching point of sale advertising through its large hi-definition screen.

Recyclever were approached by AIA Worldwide (AIA) early in 2019. Their team had been approached by Citibank who were looking for innovative ways to attract the brightest talent from universities across the UK, Ireland and Europe.

The AIA team had seen the Recyclever Reverse Vending Machine and saw the potential of the technology, the green focus and the ability to display video advertising. The team wanted to leverage it to attract students to apply to Citibank. The idea was to use a Recyclever Reverse Vending Machine with Citi branding and a selection of giveaways to attract students to discuss recruitment. The initial plan was to attend prominent spots within six venues, five in the UK/Ireland and one in Milan (that was subsequently removed).

Recyclever liaised closely with AIA Worldwide and Citibank to ensure that the branding and messaging was on point and that the universities were on board with the idea.

A custom video was produced of a branded Citibank ‘employee’ ‘trapped’ inside the machine. The large format screen was perfect, providing a life size, realistic image that attracted visitors. This was combined with a custom vinyl covering applied to the machine and complemented with students and staff in Citibank branded clothing and information.

In the end the machine visited Exeter University, Bath University, Queens Belfast, the University of Warwick and The University of Nottingham. In total the Citibank brand was seen by thousands of students with information and promotional drinks handed to many hundreds.

The use of the Reverse Vending Machine provided a positive brand image for Citibank. The focus on recycling of single use plastics and the impact on the environment being a huge worldwide issue. 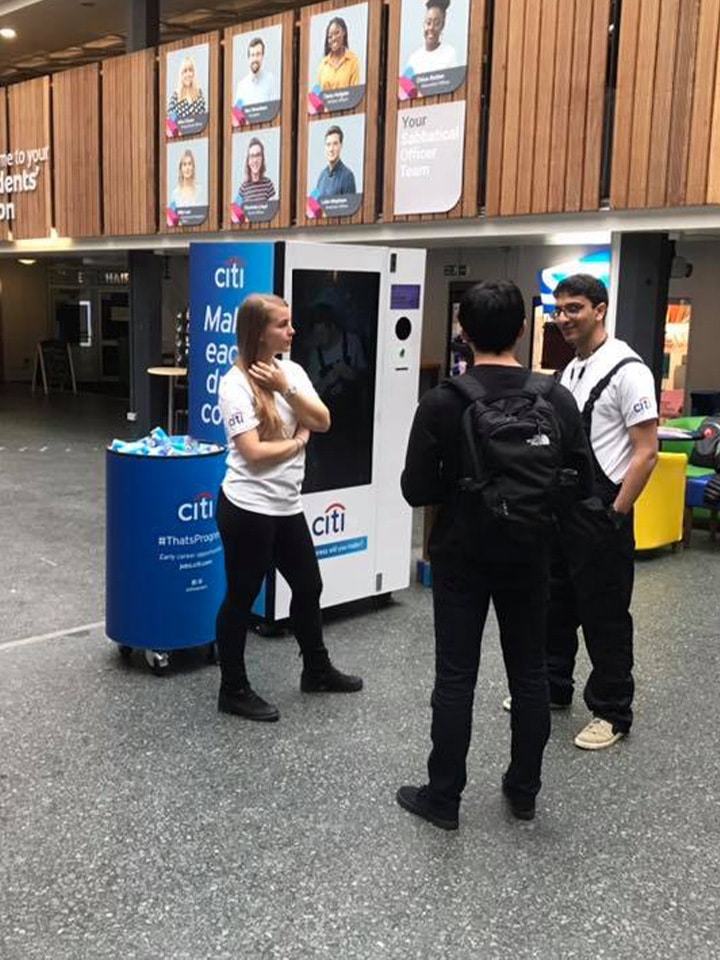 “With a need to capture the attention of students up and down the UK for our client Citi Bank, Recyclever gave us a way to turn heads and attitudes with their RVM machine. The result: a happy client, happy students and a great campaign! Thank you.” 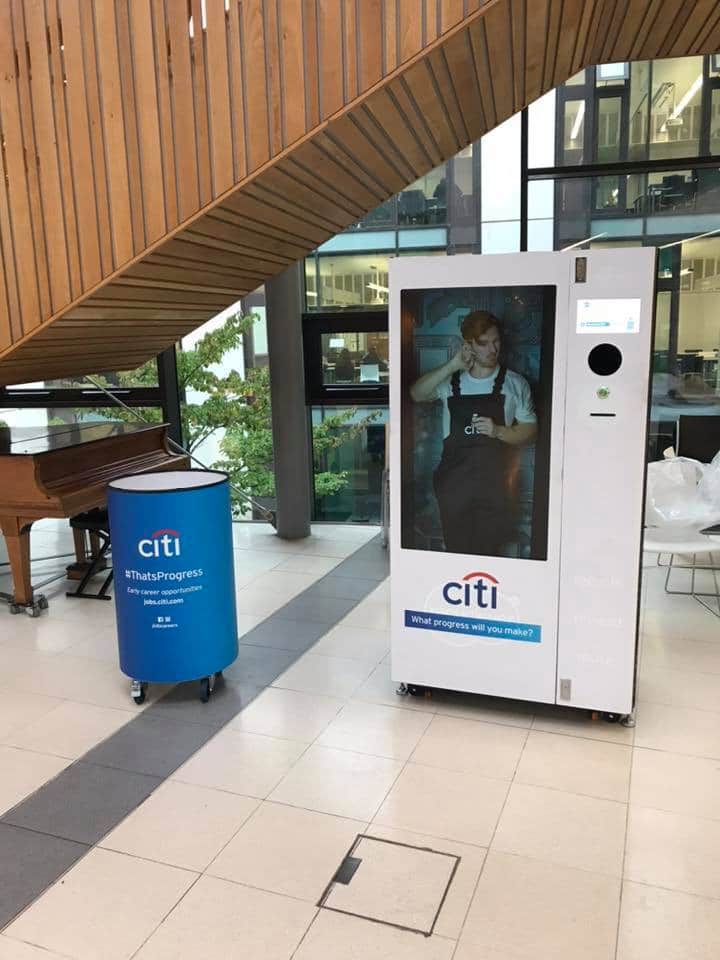 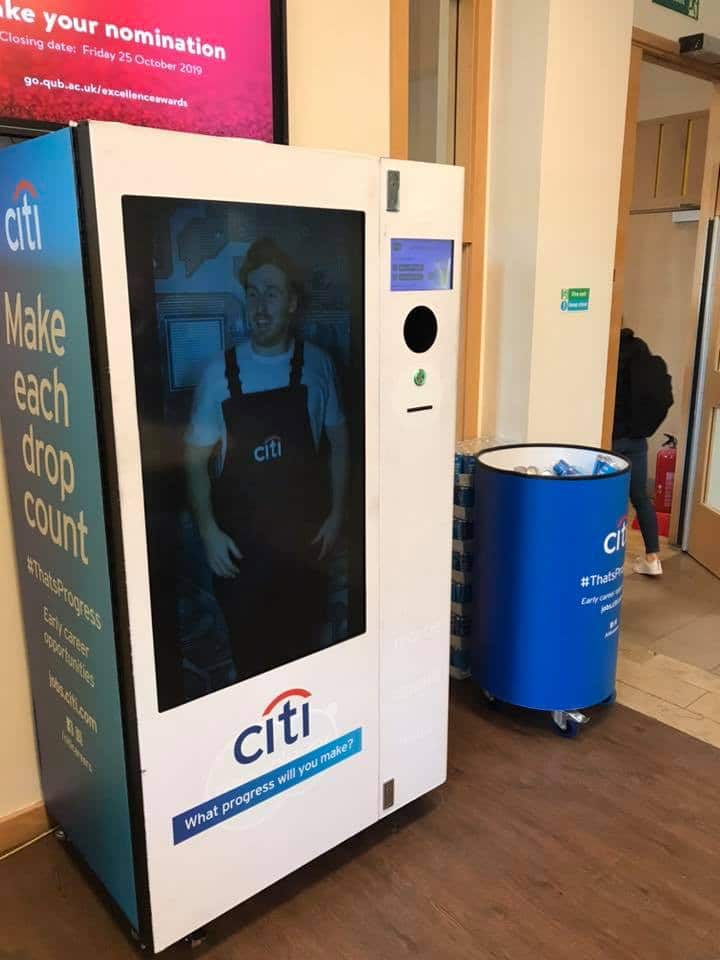 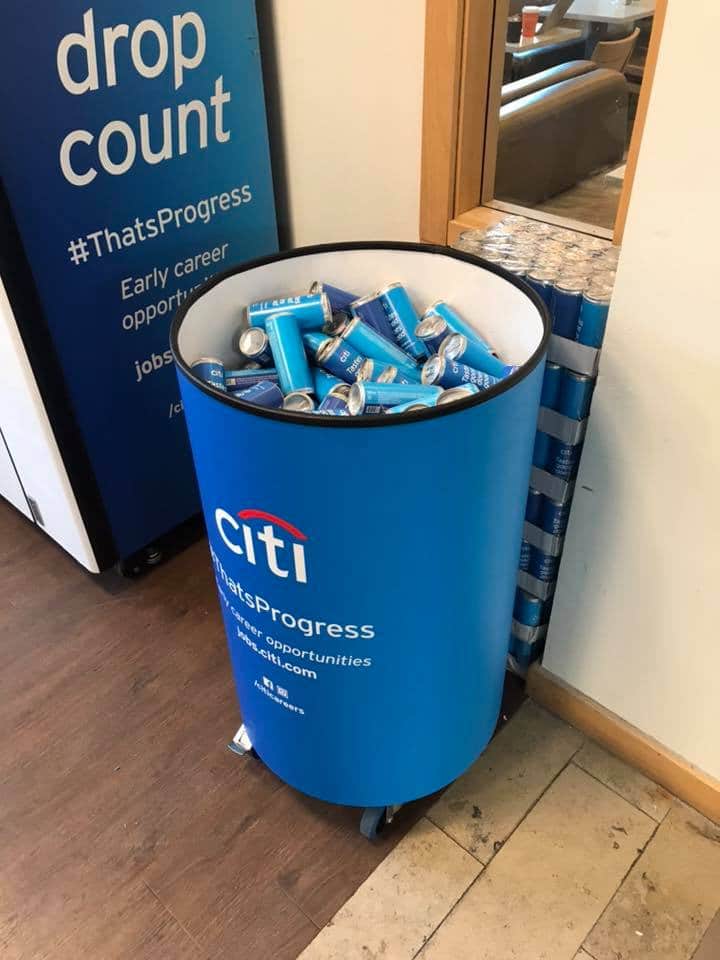 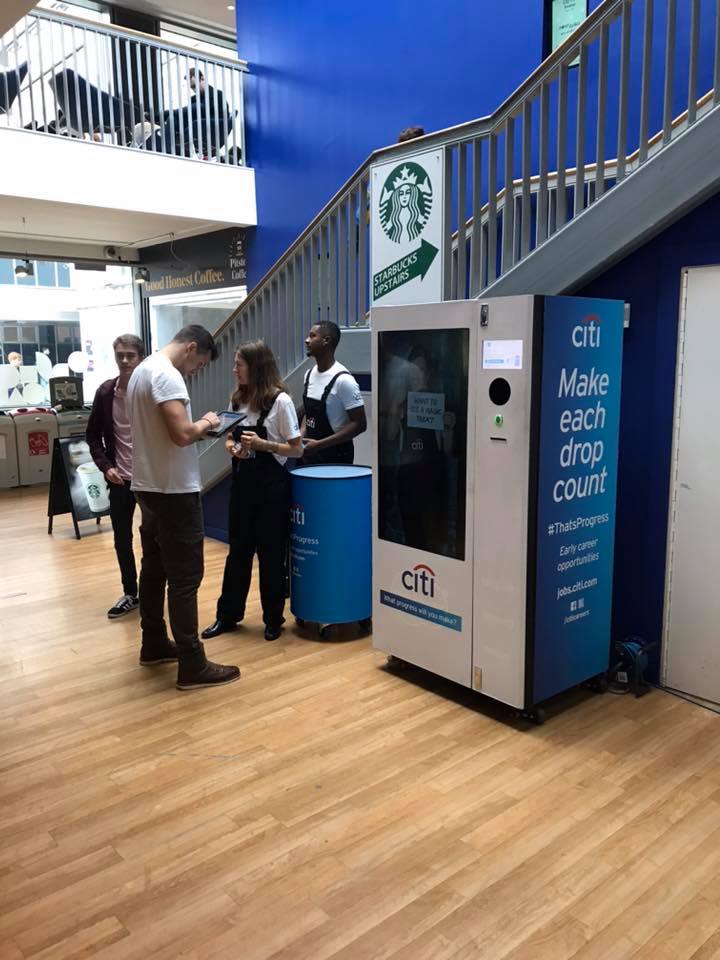 recyclever® provides the ideal solution to start to support a circular economy where more of our waste is recycled and reused instead of sent to landfill or left to damage and pollute our environment.

Our reverse vending machines provide a mechanism to offer consumers a way to return their single use plastic bottles and aluminium cans in return for a reward. The waste is then sent to a reliable recycling outlet.
The more recyclever® machines available, the better for our environment.

Get in touch with recyclever® (* Required)

Or complete our enquiry form:

By ticking the ‘marketing communications’ box you are agreeing to allow recyclever to send marketing emails, you can unsubscribe to these anytime by emailing info@recyclever.co.uk , all other communication will solely be for notification purposes such as to respond to your query or notify you of information relating to your query.